The film community is really at a stand still with the whole pandemic situation. By this Friday (June 12, 2020) I would have been out of work for 3 months! No film work for me. So, as someone that wants to inspire others to work on their skills, have people get creative, and help the new generation of filmmakers come up in the industry I wanted to try and host a Short Film Challenge. Ya know get the creative juices flowin!

How Did it Go?

I think the buzz was great, people were excited to participate. But when you actually sit down to write your short film, and then shoot it things start to get REAL really quick! Making these short films is a small taste of what you will experience on a real big union set.

Filmmaking is tough! It is not easy at all. And a short film challenge is a great way to find that out.

Even when it’s scaled down.

The Requirements for the Short Film Challenge

What do I mean scaled down?

Trying to keep your short film as simple as possible. With the world in lockdown, and everyone suggested to stay at home, that’s exactly what I focused the requirements on.

The fee was just the deterrent to make sure I didn’t watch too many movies. I wasn’t trying to make money although, I probably should have. lol

The Thing I tell Aspiring Directors

Anyone that wants to be a director, I tell them all the same thing. Start small! A Short Film Challenge is a great way to do that. There are all kinds of film challenges that happen all around the country and the world. If you want to be a Producer, Director of Photography, and/or Director, and even to get introduced to film as a Production Assistant, Short Film Challenges help with all those goals. Big and small.

I Even Had Prizes!

I wanted to offer something to the folks that took the time to make their movie. It was small, but it something! The main thing I absolutely loved was the trophy I made for it! Well, custom ordered, I should say. I was so excited to send this out to the winner! 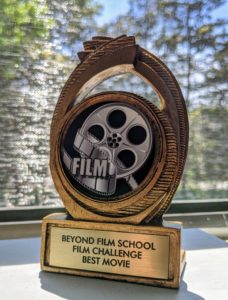 All in all I got 5 solid films out of this. All having good experiences and with feedback saying they had fun making them, and were glad to do something creative while inside at home.

I’m going to share the entries with you because I think they are all worth taking a look at.

My first entry was from Alanah Rafferty a respectable filmmaker with a love for the horror genre. I always love a horror film that is done in the day time and she delivered just that!

My next entry was from Ahmed Mohammad. This was a more experimental deep thinking film. It is in another language so make sure to put on the subtitles.

My next entry is from Tess Anfield, an animator with a pretty great Youtube channel. I was pleasantly surprised to get an animated entry! I love the story of the two sisters.

My next entry is from Anabel Caicedo who works in the camera department in the film industry and an aspiring Director of photography. I have to say I loved her camera work and her very meta short film. I loved how she used the concept of doing trying to think up an idea for this challenge as the plot of her film.

The winner of the challenge really went for it! The film by Emma-Louise Smith had production value that was really up there. They got lucky with their open floor plan. The editing was really great, and I loved their use of the required prop! Well deserving of the top spot.

All the entries were so different, and great in their own way! They all need to make sure to keep creating! I also encourage everyone to enter different film challenges around the world.

Other Film Challenges to Check Out

There are also so many challenges that happen at the local level in many different cities. I encourage you to do a google search to find one in your area.

Let me know what you think of the short films in the comments! want to contact me? You can do that here!

What Every Set Production Assistant Needs on a Film Set!

What Does A Film Unit Production Manager Do?

Going beyond what you learn in film school. 🎥
*Videos on Everything Film
*Production Assistant Training
#beyondfilmschool

If you're a Set Costumer and your set bag don't lo

I can't believe I made this video 4 years ago! And

Set PA Kits! So happy I made these happen! Very pr

Some people think, them being late doesn't matter,

You might be guilty of these things, but it's neve

I've seen Many a PA be fired for this! Get it toge

Don't touch anything! 🤣 But seriously tho you s

It's that time of year again where things start pi

I'm always an advocate for asking questions if you

We get deep into the process of film distribution!

Going on an insert on the phone!

It really is the small things when you work in fil

We have to jump into the mysterious position of th

That 1st AC life. Hidin where they can 😆 #assi

This website uses cookies to improve your experience while you navigate through the website. Out of these cookies, the cookies that are categorized as necessary are stored on your browser as they are essential for the working of basic functionalities of the website. We also use third-party cookies that help us analyze and understand how you use this website. These cookies will be stored in your browser only with your consent. You also have the option to opt-out of these cookies. But opting out of some of these cookies may have an effect on your browsing experience.
Necessary Always Enabled
Necessary cookies are absolutely essential for the website to function properly. This category only includes cookies that ensures basic functionalities and security features of the website. These cookies do not store any personal information.
Non-necessary
Any cookies that may not be particularly necessary for the website to function and is used specifically to collect user personal data via analytics, ads, other embedded contents are termed as non-necessary cookies. It is mandatory to procure user consent prior to running these cookies on your website.
SAVE & ACCEPT