And with every project, I try to be a little bit better of an AD. I’ve also learned A TON from other Assistant Directors. I’ve been able to work with some that I want to mirror and be just like, and some other ones that I know that I don’t want to be like at all. So, with all of that experience crammed into one career – I’m really, really hoping that I can help some of the aspiring Assistant Directors out there.

These aren’t in any particular order, but I am starting with a pretty big one, not being empathetic enough or at all. Assistant Directors are the leaders of the set and they’re the pushers. We want to make sure we have everything we need and that we get everything on time. And you notice within that, there was no mention of feelings.

But you have to make room for it. You’re working with people and you can’t be a robot on set. Life on set is complicated. It is stressful. People are tired. You have to make a point to check in with how people feel and think about each person’s situation. I didn’t say it was easy and this is definitely a challenge for me.

Sometimes all I want is for everyone to Suck it up and work, but I know it doesn’t work that way. Great leaders are empathetic and great Assistant Directors are also empathetic.

Being argumentative and having a rigid stance on things – is not where you want to be.  As an assistant director, there are going to be so many things are going to get in your way of having a successfully completed day.The last thing you need is to be in arguments with anyone on set, whether that’s the Director, the Director of Photography, Producers, or your own team – Anyone! Assistant Directors push everyone to the finish line that is Wrap, and we have to pivot, problem solve, adjust, and compromise with what the day throws at us as.

You’re taking a crazy idea of the Director, you’re bringing that to the crew. So hopefully you can execute the Director’s vision with hopefully not pissing anybody off in the process. There’s no room for arguments. Except for safety, I will argue to the end of days if it has to do with safety!!

The other side of this respect combo is disrespecting your team.That’s mainly the PAs and everyone you’re working with.  Let’s be honest, and I’m pretty sure we can all 100% agree on this. No one likes an ass**** and it is 100% possible to be an Assistant Director and not be an asshole. I’m really tired of that stereotype that in order to be a great Assistant Director, you have to be one.

Nope wrong! Why be rude?

Why be rude, offensive, sarcastic, arrogant, belittling humiliating. And I’ve actually worked with a bunch of ADs who have done all these things. Who’ve been like that. There’s definitely no need for it. You should not be this way, especially to your team of PAs because they do not get paid enough at all for that kind of treatment.

Get to Know the People You Work With

I know a lot of Assistant Directors that will argue this with me until the end of time.  A huge mistake of ADs is not getting to know the crew, the people that are working with and the people on their team. This one ties into the first one I mentioned a little bit because you can’t really empathize with anybody if you don’t get to know anything about them.

I know there are people out there that want to go to set, get the job done, and then go home. But who the hell wants that?! That is no fun. That’s definitely no fun for me. We’re not coding a damn computer program on set. We’re making movies and  TV shows about great stories that are about people. And to make these great stories of people –  involves a ton of people! Please work on your people, because you are going to get more job offers because of it. Your time on set will definitely be more enjoyable.

At the very least just learn people’s names! That’s the bare minimum of getting to know certain things about people just learning their names. It goes a very long way.

This one is little deep, maybe a little bit more complex, but we’re talking about Assistant Directors that are insecure. An Insecure AD is a recipe for disaster on set! When you have an Assistant Director leading a team on a film set and they’re insecure, there is no room for uncertainty feelings of inadequacy, anxieties, or worries about you not being good enough.

There is no room for that.

No one on a film set has time for a hurt ego, especially the hurt ego of an Assistant Director. You, as an AD keep things going! You make things happen! You’re the leader of the crew, and no one wants to follow someone that’s not sure of themselves.

When Assistant Directors are insecure people and the crew start to doubt you. And when that happens, that’s when chaos is ensues onset, nothing will go smoothly. Everything will be disorganized. No, one’s going to listen to you. And it’s just going to be a hot mess.

It is extremely hard to hide when you’re feeling insecure. But remember this, if you just feel a little bit insecure and you’re that Assistant Director on set. Remember someone hired you to be that AD. Someone believed in you, so you should believe in you too! Just do your best. And when you get home, that’s when you can release all the things that you can’t really release on set. Let it all go. And then you come in the next day, starting fresh.

this is actually 6, But I had to talk about this! It’s dealing with having an Us versus Them mentality as Assistant Director, having this mentality on a filmset is Super obnoxious, and also there’s no hiding it when you have this mindset.

You cannot run a smooth set when it’s going to have that competitiveness between departments. Everyone should be working together to make things happen. And when Assistant Directors have this mentality – it is the worst. Now, if you’ve seen any of my other videos, or read any of my other posts you know, that I talk about how many people it takes To get something done, to finish a movie, to make a TV show.

It takes a ton of people. One of my favorite quotes from James McAvoy. I love it so much!  If we can’t come together and we can’t get along, then it’s going to be a horrible time. It just makes filmmaking feel that much more stressful and miserable. 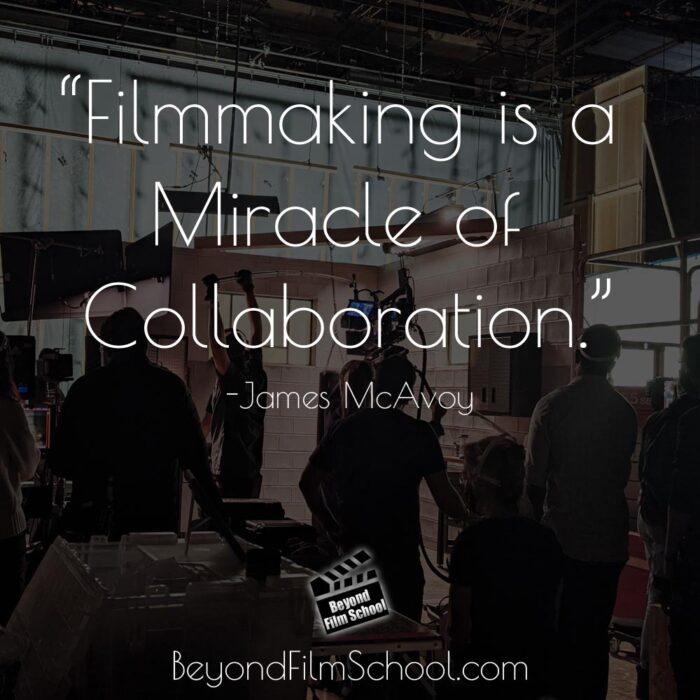 I have definitely worked with Assistant Directors that have had this mentality and everyone hated them. Everyone on the crew hate working with them.  And I’m always surprised at the fact that they keep getting hired. I know  people talk about the bottom line and they want people who to get it done, but people don’t like working with this type of team of ADs. A quote that I remember from one of the bad examples of ADs I know would say “Just let them Sink themselves”

Why would you be like that? Why can’t we, as the AD department help?

We have to be able to help other departments. That’s part of our job. You know, I can NOT get on board with the Us versus Them mentality. If you’re an AD and you’re thinking like that I feel like the spirit of filmmaking just is not within you. Why are you even in the Film Industry???

I also added a bonus one! It’s not really a mistake, but I just wish more Assistant Directors would do more of this – Give Feedback.

Give feedback to your team because I think that a lot of great Set PAs want to be better. They’re so hungry to try and get better and know what to do  the right way. And I just really think that if you’re an Assistant Director giving feedback and (not humiliating feedback) constructive feedback, it just goes so far for the new people on set. Your team just ends up being a little bit happier. They respect you a little bit more, and they work harder for you. It just goes over a lot better on set with your team.

There are so many more that I can mention in this post, but it would be a veeeeeery long post. There are the top things that I think if you had as a problem were to fix you would be such a great AD. You would get so much more work, and be in high demand!

Do I Need to be in the DGA?

Going beyond what you learn in film school. 🎥
*Videos on Everything Film
*Production Assistant Training
#beyondfilmschool

Being a woman in film. Things I've experienced, a

New video is out! What skills do you already have

Working that freelance film life is tough! Omg i s

Working in the Film industry involves working with

Getting the camera and lighting right for videos i

Not exactly the film dreams you had in mind 😆

You win some you lose some!

Don't worry about anyone else but you and your fil

Get Comfy with feeling uncomfortable folks!

There's a bunch you just don't know when you jump

Ask those questions folks! get the info you don't

Confidence In yourself is key!

You best tap into that resourcefulness I know you

Talking to the first timers out there to ease the

Soft Skills vs Hard Skills! Remember - get that Sk

When I made this video it changed the game for me

This website uses cookies to improve your experience while you navigate through the website. Out of these cookies, the cookies that are categorized as necessary are stored on your browser as they are essential for the working of basic functionalities of the website. We also use third-party cookies that help us analyze and understand how you use this website. These cookies will be stored in your browser only with your consent. You also have the option to opt-out of these cookies. But opting out of some of these cookies may have an effect on your browsing experience.
Necessary Always Enabled
Necessary cookies are absolutely essential for the website to function properly. This category only includes cookies that ensures basic functionalities and security features of the website. These cookies do not store any personal information.
Non-necessary
Any cookies that may not be particularly necessary for the website to function and is used specifically to collect user personal data via analytics, ads, other embedded contents are termed as non-necessary cookies. It is mandatory to procure user consent prior to running these cookies on your website.
SAVE & ACCEPT